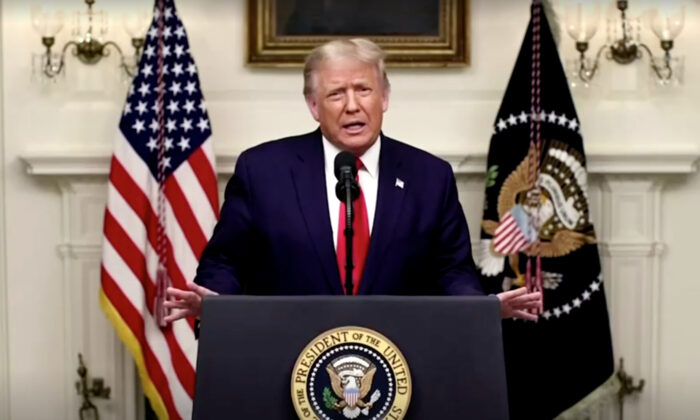 President Donald Trump told the United Nations General Assembly that the world “must hold China accountable for their actions” that led to the global COVID-19 pandemic.

“We are once again engaged in a global struggle. We have waged a fierce battle against an invisible enemy, the China virus, which has claimed countless lives in 188 nations,” he said on Sept. 22 in a pre-recorded speech, as the conference convened virtually due to social distancing.

The United States, the president said, is now pioneering COVID-19 vaccines that have entered the final stage of clinical trials.

Trump characterized the Chinese regime as “the nation which unleashed this plague onto the world,” noting that in the early stages, when the virus first emerged in China’s central city of Wuhan, Beijing chose to lock down cities while “allowing flights to leave China, and infect the world.”

“China condemned my travel ban on their country, even as they canceled domestic flights and locked citizens in their homes,” he said.

The United States first upgraded its China travel warning on Jan. 21 after the first virus patient with a travel history to Wuhan was confirmed. It then closed off its borders to travelers from China on Jan. 30, the same day the World Health Organization (WHO) declared the outbreak a global health emergency.

Trump also criticized the U.N. agency for complicity in the coverup.

“The Chinese government and the World Health Organization, which is virtually controlled by China, falsely declared that there is no evidence of human-to-human transmission. Later, they falsely said that people without symptoms would not spread the disease.”

“The United Nations must hold China accountable for their actions,” Trump said. 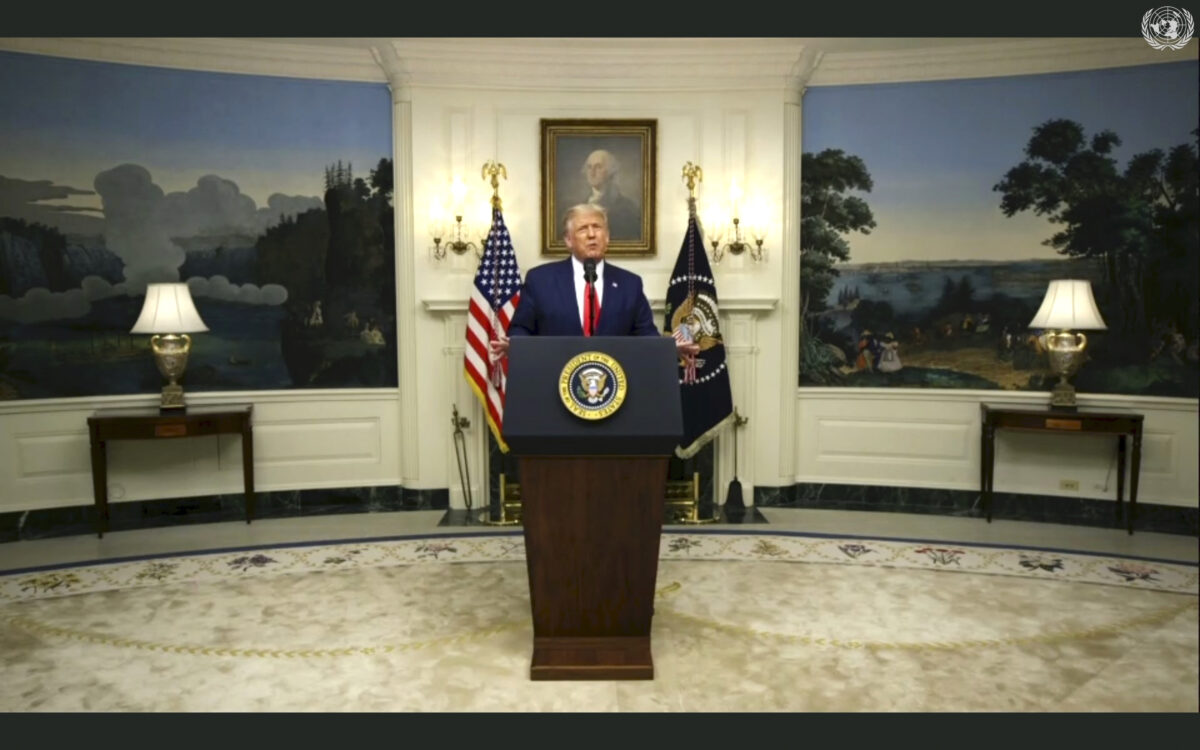 The Chinese regime didn’t publicly warn about the risk of transmission until Jan. 20.

In a video speech broadcast later during the assembly, Chinese leader Xi Jinping repeatedly highlighted the need for multilateral “cooperation,” in an apparent response to Trump’s criticism. Countries must “adhere to the guidance of science and fully exercise the World Health Organization’s leading role,” and reject attempts at “politicization and stigmatization,” Xi said.

The U.S. administration has criticized the Chinese regime for its lack of transparency during the pandemic and its human rights abuses, such as in the regions of Xinjiang and Hong Kong, as well as the persecution of the spiritual group Falun Gong. 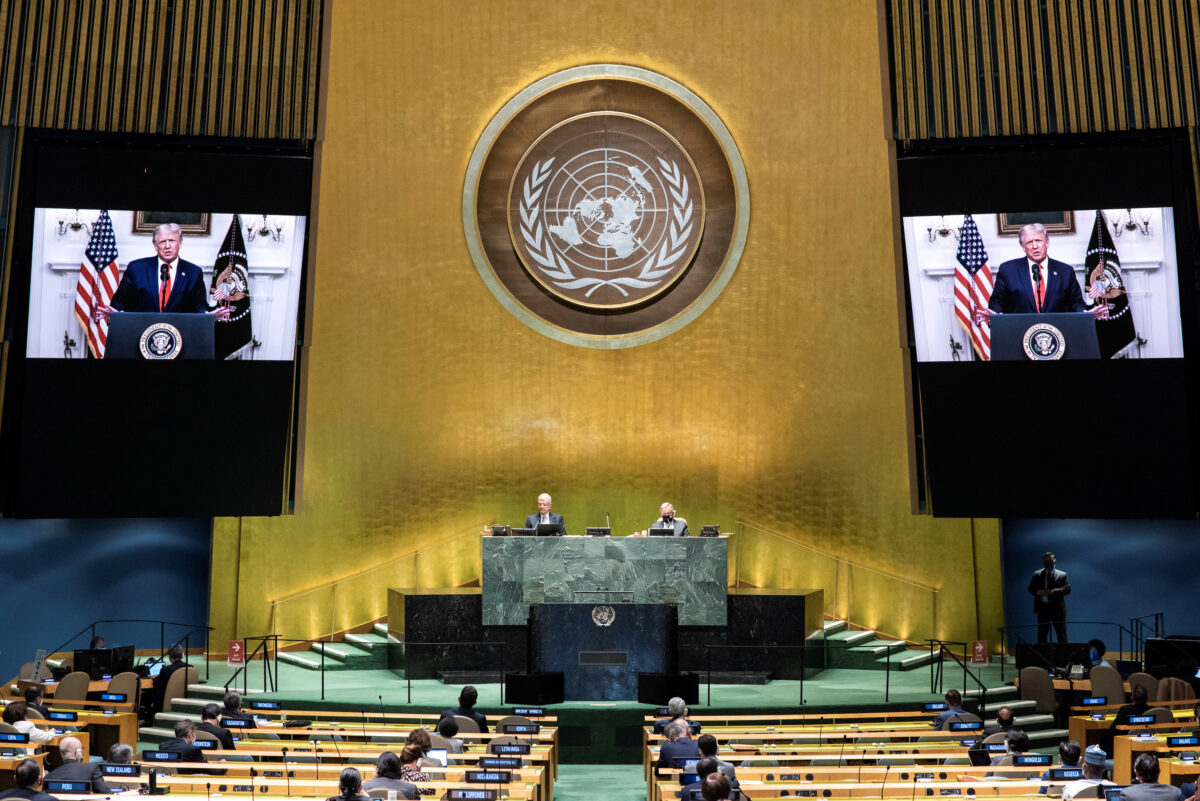 On Sept. 21, House Republicans released an audit stating that the Chinese Communist Party and the WHO are “culpable” for the spread of the pandemic. Had they acted sooner, according to the report by Republicans on the House Foreign Affairs Committee, a global outbreak would likely have been prevented.

“It is crystal clear that had the CCP been transparent, and had the head of the WHO cared more about global health than appeasing the CCP, lives could have been spared and widespread economic devastation could have been mitigated,” Michael McCaul (R-Texas), the ranking Republican on the committee, said in a statement.

“Americans who have been victimized by the lies and deceit of the Chinese Communist Party (CCP) … deserve the opportunity to hold China accountable and to demand just compensation,” Sen. Martha McSally (R-Ariz.) said in a July 20 statement about the legislation.

In July, the United States, which has been the top government donor to the Geneva-based WHO, announced that it would withdraw from the agency, citing the WHO’s failed pandemic response. The withdrawal officially takes effect next year.

Thank you for sharing Hellen...I will watch them both...

Ara replied to the discussion 'For Ascension We Want To Phase Out Meat Eating, Alcohol , Smoking, Drugs Plus More That Is Creating Zombies With No Spiritual Knowledge'
"This is about HABITS not HUMAN BEINGS, habits will always remain in our life. HOWEVER - THEY DO NOT…"
6 hours ago

This group is based on Wisdom, Balance and Clarity that the Universal Laws when applied in our…See More
13 hours ago
33 Comments 5 Likes