Saint Germaine holds the Flame of Freedom for the Earth. The Violet Flame is the essence of the seventh Ray. It is used for Healing, Transmutation and many other things. There is also the Silver Violet Flame and the Golden Violet Flame. Violet Flame Reiki is a gift from Quan Yin who is also a Violet Flame being.

STAY UPDATED! Subscribe below and get updated via Email about New Discussions.

START A DISCUSSION and share your knowledge and experiences Ascended Master Saint Germaine, le Comte de Saint Germain, the Wonderman of Europe, and many other names belong to the fascinating mysterious man chronicled as, "The man who knows everything and never dies". He is well known for his involvement with shaping 18th century Europe. He was a favored guest at Versailles, confidant to King Louis and Marie Antoinette, Napoleon, Queen Catherine of Russia, and many other heads of state during that time. He was known to have lived over 300 years, never aging, partially due to the mysterious Elixir and other alchemical substances he created. A few historical incarnations include; the Prophet Samuel, Plato, Merlin to King Arthur, Roger Bacon, Francis Bacon, Christopher Columbus, Saint Alban, Saint Joseph - father to Jesus, Prince Rakoczy (Rákóczi), and possibly, Leonardo Di Vinci. He was a powerful healer and High Priest in Atlantis. It was there that he first introduced the Sacred Violet Flame of Transmutation as a gift to humanity. His many lives have common themes of magic, alchemy, mystery, brilliance, transformation and spiritual devotion. All took place during pivotal times of history where he was instrumental in bring forth expansion and higher evolution of humanity. 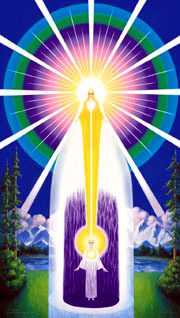 He lives in both the Higher Realms; as the Lord of the Seventh Ray, the Violet Ray of freedom, alchemy, justice, mercy and transmutation, and in earthly dimension; by physically appearing from time to time, and through his direct influence and instruction to people he has selected to be his "assistants". Soon Saint Germaine will reign as the leader of the Golden Age, the Age of Aquarius, when our planet Earth ascends into the 5th dimension. 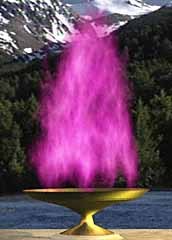 The violet flame is the essence of one of the "seven rays". Just as a ray of sunlight passing through a prism is refracted into the seven colors of the rainbow, so spiritual light manifests as seven rays. Each ray has a specific color, frequency and quality of God's consciousness. The violet ray is known as the seventh ray.

When you invoke it in the name of God, it descends as a beam of spiritual energy and bursts into a spiritual flame in your heart as the qualities of mercy, forgiveness, justice, freedom and transmutation. 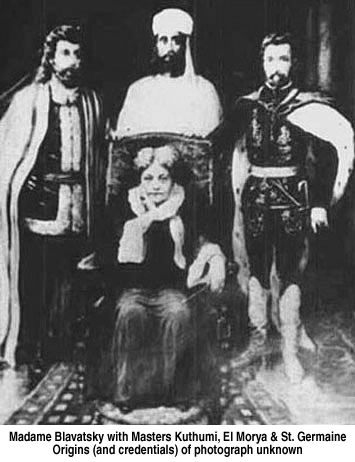 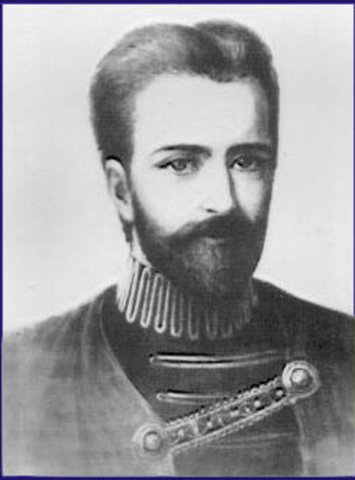 ST.GERMAIN: The Man Who Never Dies…

The Man Who Never Dies…“A man who knows everything and who never dies,” said Voltaire of the Comte de Saint-Germain.AMONG the strange mysterious beings, with which the eighteenth century was so richly dowered, no one has commanded more universal comment and attention than the mystic who was known by the name of the Comte de St. Germain.“He [St. Germain] taught that man has in him infinite…Continue

The Science of Ascension Symptoms

THE SCIENCE OF ASCENSION SYMPTOMSLet me attempt with some words as best as I will be guided:Ascension1 as we all know is a business of Energy2 Integration, Shifts, Vibration and Frequency (constant movement – periodic pulse of energy) - the transition/graduation into a higher vibrating frequency version or rather band of Earth; in simple terms ascension is changing our frequency band so to speak, and can be assimilated to a transition from AM to FM band (3D to 5D) 3. It is in effect the…Continue

Violet Fire   decreeIn the Name of the Beloved Mighty Presence of God, I AM in me, and my very own Beloved Holy Christ Presence, by the Power and Authority of the Immortal, Victorious Threefold Flame blazing upon the Altar of my Heart, I call to Beloved Alpha and Omega in the Great Central Sun, Beloved Helios and Vesta in the Sun of our System, Beloved Saint Germain and Portia, Beloved Maha Chohan, Beloved Omritas “Ruler of the Violet Planet,” Beloved Archangel Zadkiel and Holy Amethyst,…Continue

How to get a rolling momentum of Violet Fire going!

How to get a rolling momentum of Violet Fire going! Lovely God PresenceIAM in MeHear me now i do decree! Bring to pass each blessing for which i call Upon the Holy Chrst Self of each and ALL. Let Violet Fire of Freedom Roll!Round the World and make us wholeSaturate the Earth and its People tooWith Increasing Christ Radiance Shining Through IAM This Action Of God AboveSustained By The Hand of Heaven's LoveTransmuting the Causes of discord HereRemoving the cores that none do fear IAM IAM IAM The…Continue

Saint Germain And The Brotherhood Of Light - Some History

SAINT GERMAIN:Saint Germain has been known by many names and associations. He has been called “the Wonderman of Europe and the Count de St. Germain. His last known lifetime was as Francis Bacon, the European statesman and Occult figure.Francis Bacon historically is said to have passed into the physical change called death in 1626. Many people believe Francis Bacon secretly faked his own death. Well he could not have done it openly, could he?Some believe he escaped to a secret occult life in…Continue

Germaine - The God of Freedom

Beloved, it is with great interest that I observe the statements that are made and attributed to me. It is a very great concern that information be consolidated, corrected and enjoyed from the Light and Love that is intended.What is the I am presence? It is that within you which is part of God Source. The balance within, the core star of who you are. You are no different than I, equal in that part of Source we all are. I have greater consciousness than you, not better, just more in my mastery…Continue

You need to be a member of Saint Germaine & The Violet Flame Focus Group to add comments! our saint germain has been very busy ,this playlist tells us all bout it

Krishna Kalki replied to the discussion 'Lewis Hamilton...Why The Hell Is He Bringing Corrupt Black Lives Matter Into Sport ???...SOROS BOY...Should Be Banned From Motor Racing For He Can Become Soros's Driver'
"Cheeky man wearing tee shirt with black lives matter ...he can join the group below the people he…"
6 hours ago

Enjoy this video as I did, a very interesting woman that explain exactly how our entire life we are…See More
7 hours ago
0 Comments 0 Likes