The symbol chosen for these annual conferences is the Cosmic Thunderbolt: Sanskritvajra, Tibetan dorje, and Japanese kongō. This enigmatic “weapon of the gods” directly links a global theme of antiquity to the leading edge of plasma science. 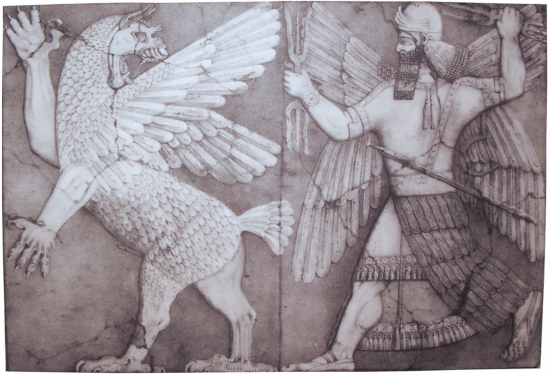 An early form of the bipolar thunderbolt in the hands of the mythic Assyrian warrior, Ninurta

It’s not surprising that few scholars and scientists have paused to wonder about our early forebear’s fascination with the thunderbolt image, or the extraordinary things said about it. Most researcher’s routinely assume that the ancient sky was essentially identical to our sky today, leaving little to wonder about. As today, so before.

Nevertheless, a remarkable fact leaps out to us from the ancient cultures. While the modern interpretation sees the image as a fanciful lightning bolt, it does not look like lightning at all. It’s earliest and most common form is bipolar, a feature never exhibited by terrestrial lightning. But the archaic image presents a stunning match to electrical phenomena in space and in laboratory experiments. This match is far too precise to be accidental.

Images of the cosmic thunderbolt, taken from Greek coins, illustrate the variations in the bipolar symmetry. The common forms can be understood as conical and cylindrical structures similar to those seen in high energy laboratory experiments. Often the luminous limbs stand out in visible light and other frequencies.

Stylized illustration of 3-D electric discharge forms in the plasma laboratory, occurring between two electrodes. In contrast, the 3-D electrical environment in space provokes axial jets evolving in both directions from a charged body.

In virtually all of the ancient depictions—just as in laboratory discharge experiments—the morphologies of the discharge evolve out of an axial “jet.” The axial column is always present. But where is the jet in the “butterfly” nebular forms shown above? Two or three decades ago, the question might have gone unanswered. But now, thanks to the advanced ways we see objects in space, we know the axial jet is there, exhibiting the very serpentine form commonly associate with the evolving thunderbolt image (the Lightning Serpent archetype). You can see it in motion in the Wings of a Butterfly Nebula at the bottom of the page here: http://en.wikipedia.org/wiki/Planetary_Nebula_M2-9 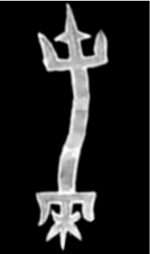 The ancient accounts describe thunder gods roaring in the heavens or hurling a “thunder-weapon” against monstrous intruders. What would it mean were we to give tentative credence to this global memory? It would mean radical new opportunities for interdisciplinary investigation, with profound implications for modern science.

The cosmic thunderbolt directs us to space age discovery, while also illuminating the dark corners of human history. It invites us to compare telescopic images from space to the anciently-remembered events. Laboratory experiments with intense electric discharge will then find an indispensable place next to prehistoric rock art, where we observe identical formations carved on stone.

By following this path of exploration, we arrive at an extraordinary conclusion. Our ancestors lived beneath an electrified sky, a source of awe and terror. And they preserved a permanent record of the events on the rocks around them. Earth-shaking spectacles produced an explosion of human imagination, as the celestial provocation left its imprint globally, in the mythic and symbolic archetypes that shaped every early civilization.

The Greek image of the cosmic thunderbolt on the left finds a stunning counterpart in the bursts of sprites firing into space in the Earth’s upper atmosphere, with durations counted in milliseconds. The geometries of sprites can be scaled both upward and downward to match bipolar discharge in space and in the laboratory. For more information see:https://www.thunderbolts.info/wp/2013/10/30/bolts-out-of-thin-air-2/ Right Photo Credit and copyright: Walter Lyons, FMA Research, Fort Collins, Colorado, United States of America/NASA.

For further reference, view Seeking the Third Story, a presentation given at EU2012 by David Talbott.

here is a giant Vajra at a Tibetan temple in Nepal... Oh how neat, thank you, Feather.  I didn't know they had these in Nepal, I would love to visit there and see the monasteries.

Kelly, yes, there is a big Tibetan influence in Nepal and many Tibetan monasteries and temples.  lots of beautiful handcrafts, too.... This also reminds me of the Vesica Piscis..

Ahh yes... I see.  Beautiful, how it all works. Thank you for sharing... it's so interesting.

Permalink Reply by Roaring Lovely on August 17, 2015 at 1:46pm
Often I have thought that ancient men might have leaved in a quite different scenario than ours. This would allow them to beleive in things that we find it odd nowadays such as unicorns etc. For instance miracles might have been common 2000 years ago depending on where the solar system was on its way round the milky way.

Yes, Rama Pemba, you are sooo right.  If our atmosphere was more "electric", it would have far reaching implications, their brains would have processed differently, their chakras...everything. Dragons...now that is a pretty electrical seeming being, maybe they were present, there certainly is enough sculptures of them on each continent.

Thanks for reading, Darkstar, nice to see you :-)

Steve Hutchinson commented on the group 'Divine Upliftment For Spiritual Growth & Ascension'
"SolaraAnRa: So many of us are struggling to sleep well these days! This is a w wonderful aid to…"
57 minutes ago