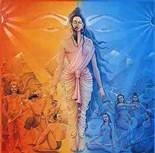 The esoteric writings of the Arcane School (8) speak of the millennia of 2000 as being the period of the “two,” meaning the time when there will be a coming together of the dualities of masculine and feminine. While many books today note the rise of the feminine archetypes they say it does not point to a return of matriarchal cultures, but rather to a time when the masculine and the feminine will begin a true partnership. At this period in our history, we, as a species, cannot come into our full potential until the whole authentic woman takes her place in equal relationship with the whole authentic man and until a substantial sector of the culture holds the worldview that respects this.

The esoteric writings also note that the early years of our current epoch will be marked by the feminine archetype infused with a powerful will. In a remote valley in the Himalayas, old wise ones meet each year in May to meditate and receive the new energies believed to be bathing the planet. This event is called the wesak festival and is celebrated around the world by those following the esoteric teachings. They say that the energy, which is pouring in at this time is that of “the feminine warrior.” She is coming with vigor, for the old structures must be dissolved and the balance between the sexes restored. The quality that this strong feminine warrior, as described carries, is that of “compassionate power,” an essential aspect for our new world.

In Search for the Woman Warrior, R.J Lane and J. Wurts also write that the world that is trying to emerge must interweave both the masculine and feminine qualities and strengths. They point out that woman’s journey requires warrior qualities just in passing from youth to maturity, regardless of how a particular culture defines warrior (9). They speak of the natural endurance of women: “As long as women bear children, they know in their guts in a way that men will never know, how much unremitting effort goes into the creation of mammalian life.”

The authors note that women now need to be acknowledged for carrying those energies of practicality, purposefulness, relatedness, insight, intuition, and compassion. The cultural times require these strong and mature ways of feminine knowing. Many writers point out that honoring the feminine way will bring a sense of intuitive attunement with the deeper states of consciousness, so needed to soften the drivenness (individual and collective) of our chronic warrior way.
Culturally, what women can also contribute to the new synergy is “receptive surrender.” This is a personal internal event that creates the spaciousness to hear others. It opens us to relationship. From the insights gained by this process, a new tone is brought, a new color is woven; we are connected to a larger world. It is a psychic event of maturity and from this inner space we can act more wisely by knowing the origin of another’s responses.

This is, perhaps, much of the appeal of the wonderful movie Whale Rider. A young girl, grandchild of the elder of a dispirited Maori community, stubbornly carries out all the requirements to succeed him as the spiritual leader of her clan. She does this with incredible persistence and despite the contempt and continual dismissal of her grandfather.

She is able to intuitively call the whales, messengers of old earth wisdom. Whales are special to the traditions of the Maoris whose myths tell of a time when they were lost at sea and a giant whale appeared to guide them to the misty and remote islands of what we call New Zealand. One of their brave warriors rode on the whale’s back.

Now the Maori culture has become demoralized. When a pod of whales beaches tribal members work tirelessly to push the whales back into the sea. However, it is the young girl who, with great courage, is able to persuade them. She does so by stroking and crooning to the largest whale and then, crawling on to its back to encourages it to heave its great bulk back into the water. Riding the whale, she provides a magnificent image of synergy with the natural world. The community’s faith in the mythic strength of it’s origins is restored. The former healthy order returns and the tribe again become a proud and effective group.
When the culture opens more fully to the gifts that the feminine archetype brings then individuals will find it easier to see their contra sexual side. As women integrate their masculine aspects (and are not dominated by them) and men accept their more feminine qualities we will go a long way to bridge the separateness that characterizes our times. The journey to wholeness requires this type of integration.

For More Info On Warriors: http://www.cgjungpage.org/index.php?option=com_content&task=view&id=769&Itemid=1%23ch2feminine

"An exact measurement and then an electromagnetic device that can utilize solar radiation to cut the distance? Some thing like this will probably be viable in the 4rth dimension -I'm guessing the physics are more pliable for this in the 4rth-"

"Yes Sir/Madam big changes coming ..may get worse at first then get better ..part of detoxification of planet Earth and all living entities"
More…
Loading ...