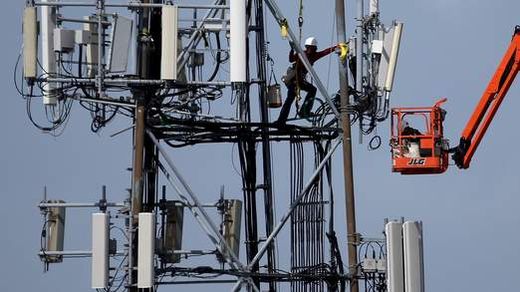 © sovereignfm.com
Fake towers...what do they do and why?
Fake masts are discovered by people using a heavily customised Android device - but it's unclear who owns them. Mysterious fake mobile phone towers discovered across America could be listening in on unsuspecting callers.

A report by Popular Science says the towers have been discovered across the country, and have the ability to attack mobile phones through eavesdropping and installing spyware.

They were discovered by people using a heavily customised Android device called the CryptoPhone 500. It uses a secure version of the software which can tell if the phone is being subjected to what is known as a baseband attack. It is then possible to trace the location of the offending tower.

The fake cell towers were detected in July, but the report states there could be more. 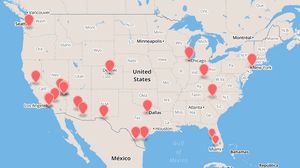 © nworeport.me
Rogue cell towers identified by the firewall on CryptoPhones in August.
Les Goldsmith, chief executive of security firm ESD America, told the magazine:"Interceptor use in the US is much higher than people had anticipated. One of our customers took a road trip from Florida to North Carolina and he found eight different interceptors on that trip. We even found one at a casino in Las Vegas."

He said several of the masts were situated near US military bases.

"Whose interceptor is it? Who are they, that's listening to calls around military bases? Is it just the US military, or are they foreign governments doing it? The point is: we don't really know whose they are."

Comment from SOTT: The public has been put on the defensive. In order to avoid personal calls and the information stored in your phone being intercepted and manipulated, a custom firewall has to be installed to alert the user when activation occurs or when rogue cell towers force the use of a less secure network to make the intercept easier - and only if it is a CryptoPhone - and only for government customers with multiple installations. There is no installation or app for single customers (yet, if ever).

IMSI catchers, stingrays or GSM interceptors as they're also called, force a phone to connect to them by emitting a stronger signal than the legitimate towers around them. Once connected, pings from the phone can help the rogue tower identify a phone in the vicinity and track the phone's location and movement while passing the phone signals on to a legitimate tower so the user still receives service. Some of the IMSI software and devices also intercept and decrypt calls and can be used to push malware to vulnerable phones, and also be used to locate air cards used with computers. The systems are designed to be portable so they can be operated from a van or on foot to track a phone as it moves. But some can be stationary and operate from a military base or an embassy. The reach of a rogue tower can be up to a mile away, forcing thousands of phones in a region to connect to it without anyone knowing. It can remote-operate your phone camera and make undisclosed connections. You also might be one of 1,000 or 10,000 people having calls being listened to.

Comforting thoughts, eh? One more thing we are not supposed to know about.
http://www.sott.net/article/285191-Mysterious-fake-mobile-phone-tow...

Thanks Kelly. In the spirit of Edward Snowden, NSA code breaking ace and NSA director of Technical information William Binney is the new whistle blower that the mainstream media won't reveal or interview, and hence he is the real deal (like Snowden).  Binney had a higher rank than Snowden, and he  blew the whistle on these towers, and how the U.S. government is breaking the law with these towers by not only gathering information (i.e. passwords, your credit card data, cell phone conversations) but tracking movements on people as well in the name of "protecting us from the terrorists."  It is basically "J. Edgar Hoover on steroids."

"The ultimate goal of the NSA is total population control; the NSA is now the new stasi agency."

Click https://www.youtube.com/watch?v=C5oU7LWHdSM for a 22 minute eye-opening interview with Alex Jones about how the U.S. government is currently practicing an impeachable act that Congress knew about and that this illegal activity goes all the way back to Bush Jr, and yet they are still practicing this abominable act.

Permalink Reply by Kelly Lightchalice on September 9, 2014 at 2:40am

Thank you for the link, good intel, much appreciated, Malcolm :-)

Our (s)elected officials have been informed of this illegal activity, and our (s)elected officials replied to a concerned and outraged public with the claim that these towers are for monitoring "gunshots and crime," "screams or cell phone calls of people needing help," and "tracking ISIS terrorists" (who are incidentally allowed to post on Twitter for the reason that "this makes it easier to track them" (AND NOTE THAT THIS IS THE SAME TWITTER THAT PULLS ALEX JONES POSTINGS OFF BECAUSE OF "sensitive content.")

But then what do I know, I'm just a wingnut, so it's probably right to have these towers to protect the American public from nutjobs like me.

But they aren't protecting america from "nutjobs like you", if they were, you wouldn't be here right now, yet you are.

They've said that it's for monitoring "gunshots and crime," "screams or cell phone calls of people needing help," and "tracking ISIS terrorists"

Would it really be so awfully unlikely that it actually is what they say it is?
I mean, how many of your friends have been arrested and put to death in concentration camps so far, in this so called "fascistic" country you sometimes claim you live in and that is supposed to be very efficient in exterminating its internal enemies? ;)

ACUTE OBSERVER: eavesdropping on ANYONE without a warrant is a violation of the Fourth Amendment of the U.S. Constitution.  Here's some tabloid information for you from Cornell University School of Law:

The Fourth Amendment originally enforced the notion that “each man’s home is his castle”, secure from unreasonable searches and seizures of property by the government.  It protects against arbitrary arrests, and is the basis of the law regardingsearch warrants, stop-and-frisk, safety inspections, wiretaps, and other forms of surveillance, as well as being central to many other criminal law topics and to privacy law.

We're too scared of our government to do anything about it. Because if one of us rebels, they'll use that person as an example.

The problem is that the government wants the public to react violently, because they have bigger and better weapons than the public has (and can use this violence as an excuse to install martial law) and they have a mainstream television media that obeys their commands.  But the problem still exists with bullets still hurting more than Molotov cocktails, and shutting down the internet can have huge repercussions, as Egypt found out.  The United States is in a financial mess and it will go the same way as the old Soviet Union went, so the best we can do is not do anything violent and continue waking people up, as well as peacefully protest. The last act of every government run by criminals is to loot the public, and we are seeing this with the banks getting bailed out by the U.S. Treasury Department and the insurance companies getting bailed out via Obamacare.

"Every dog has his day."

"Only the paranoid survive."

-  Andy Grove, founder of Intel Corporation (NOTE: Intel Corporation is no longer owned by Andy Grove and is now headquartered in Israel for reasons of "national security."  Intel currently manufactures microchips with "backdoor" features that allow the NSA and the CIA (AND ISRAELI MOSSAD) to enter and explore anyone's computer data collections and past memories.  So why not be a little paranoid?????

Jeez I hope they didn't capture my moon (mooning) shot the other night!! Doesn't surprise me as to what lengths they will go to for control!!

Are You Doing This The Easy Or Hard Way By Patricia Cota-Robles ... And ... Mother Mary's Temple Of The Immaculate Heart By Anrita Melchizedek ... And ... The Love Of The Earth By Pamela Kribbe

Drekx Omega commented on the blog post 'Message of Calming To American Voters and The US Republic'
"VERY IMPORTANT for all American citizens to get to their polling stations and vote for Trump, this…"
6 hours ago

Valana commented on the blog post 'Message of Calming To American Voters and The US Republic'
"The message of the hour for this election year.  "
6 hours ago

rev.joshua skirvin commented on the blog post 'Meet the New King of England, Joseph Gregory Hallett; believe it or not: Waki Waki light-warriors'
"This is the 2nd vid, I saw the 1st one about 1 year ago or more. It was done very professionally…"
8 hours ago

Ludvig Roth liked amparo alvarez's blog post THE NEXT STEP IN YOUR EVOLUTION: PARADISE ON EARTH - THE 9TH ARCTURIAN COUNCIL
13 hours ago