The Fire Festival of Beltane

This festival is also known as Beltane, the Celtic May Day. It officially begins at moonrise on May Day Eve, and marks the beginning of the third quarter or second half of the ancient Celtic year. It is celebrated as an early pastoral festival accompanying the first turning of the herds out to wild pasture. The rituals were held to promote fertility. The cattle were driven between the Belfires to protect them from ills. Contact with the fire was interpreted as symbolic contact with the sun. In early Celtic times, the druids kindled the Beltane fires with specific incantations. Later the Christian church took over the Beltane observances, a service was held in the church, followed by a procession to the fields or hills, where the priest kindled the fire. The rowan branch is hung over the house fire on May Day to preserve the fire itself from bewitchment (the house fire being symbolic of the luck of the house).

This is a holiday of Union--both between the Goddess and the God and between man and woman. Handfastings (Pagan marriages) are traditional at this time. It is a time of fertility and harvest, the time for reaping the wealth from the seeds that we have sown. Celebrations include braiding of one's hair (to honour the union of man and woman and Goddess and God), circling the Maypole for fertility and jumping the Beltane fire for luck. Beltane is one of the Major Sabbats of the Wiccan religion. We celebrate sexuality (something we see as holy and intrinsic to us as holy beings), we celebrate life and the unity which fosters it. The myths of Beltane state that the young God has blossomed into manhood, and the Goddess takes him on as her lover. Together, they learn the secrets of the sexual and the sensual, and through their union, all life begins.

Beltane is the season of maturing life and deep found love. This is the time of vows, handfastings and commitment. The Lord and his Lady, having reached maturity, come together in Perfect Love and Perfect Trust to celebrate the joy of their union. This is a time to celebrate the coming together of the masculine and feminine creative energies. Beltane marks the emergence of the young God into manhood. Stirred by the energies at work in nature, he desired the Goddess. They fall in love, lie among the grasses and blossoms and unite.

The flowers and greenery symbolise the Goddess and the Maypole represents the God. Beltane marks the return of vitality and passion of summer. Another common focal point of the Beltane rituals is the cauldron, which represents the Goddess. The Welsh goddess Creiddylad is connected with Beltane, often called the May Queen, she was a Goddess of summer flowers and love.

May Day has long been marked with feasts and rituals. May poles, supremely phallic symbols, were the focal point of old English village rituals. Many people arose at dawn to gather flowers and green branches from the fields and gardens, using them to decorate the village Maypoles.

The May Queen (and often King) is chosen from among the young people, and they go singing from door to door throughout the town carrying flowers or the May tree, soliciting donations for merrymaking in return for the "blessing of May". This is symbolic of bestowing and sharing of the new creative power that is stirring in the world. As the kids go from door to door, the May Bride often sings to the effect that those who give will get of nature's bounty through the year.

In parts of France, some jilted youth will lie in a field on May Day and pretend to sleep. If any village girl is willing to marry him, she goes and wakes him with a kiss; the pair then goes to the village inn together and lead the dance which announces their engagement. The boy is called "the betrothed of May." 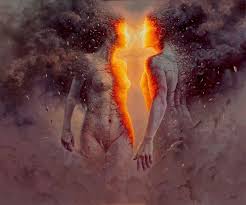 The fires of love and passion create life and at this time we celebrate the the connection of masculine and feminine energies, which spark together and form a ladder of energy for life to emerge from.  The womb is a sacred chalice which brings forth life from the higher planes of consciousness, this is true for animals as well as humans.  Beltaine is an ancient celebration of this life which connects the god and goddess as one and the rebirth of our planet into spring.  This celebration has traditionally involved fire so during meditation, I suggest the simple method of fire gazing, using a candle or fireplace... see how the colors of the flame move and connect to create the whole... it can make you sleepy, and that is okay, but by careful not to fall sleep with your candle burning.

"An exact measurement and then an electromagnetic device that can utilize solar radiation to cut the distance? Some thing like this will probably be viable in the 4rth dimension -I'm guessing the physics are more pliable for this in the 4rth-"

"Yes Sir/Madam big changes coming ..may get worse at first then get better ..part of detoxification of planet Earth and all living entities"
More…
Loading ...