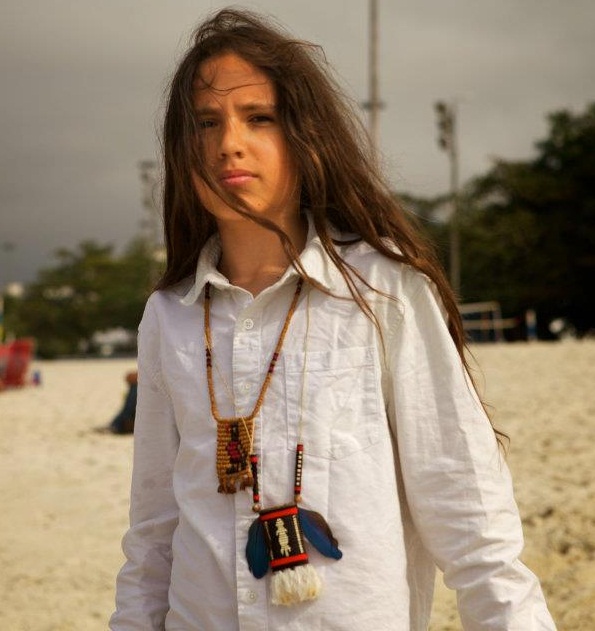 Xiuhtezcatl Martinez, a 13 year old indigenous environmental activist from Boulder, Colorado, came into the world through the Aztec culture on his father's side, and environmental activism on his mother's side. His name was chosen by Aztec elders of Mexico based on the cosmology of the Aztec calendar and given to him when he was six weeks old in the Black Hills of South Dakota by elders Arvol Looking Horse and Xolotl Martinez. Xiuhtezcatl has been participating in ceremonies and Aztec dancing since he could walk, and is very connected with his culture. He grew up learning to respect and care for the Earth and all life upon it.

His deep connection with the Earth inspired him to become a voice for protecting the Earth at a young age, giving his first speech at a climate change rally when he was six years old (see https://www.youtube.com/watch?v=b6PrMybQzyQ).

He has remained vigilant in his work as he has watched the trees and forests he loves die from beetle infestation, eco-systems collapse, and species disappear, which are a direct result of our environmental and climate crises.

Xiuhtezcatl is the youth director of Earth Guardians, a non-profit environmental organization that is committed to protecting the water, air, earth, and atmosphere. He has organized many rallies, actions, demonstrations and events, and has spoken globally on many issues. Projects include organizing the largest US iMatter March in Denver in the spring of 2010 with over 2,000 young people.
Xiuhtezcatl has worked with Boulder City Council members, County Commissioners, senators and congresspeople, and has collaborated with over 50 environmental organizations. He has led and participated in many victories including getting pesticides out of Boulder’s city parks, achieving a fee for plastic bags, and containment of coal ash.

He is currently working on helping fight for a statewide ban on fracking. He gives presentations on fracking in schools and at conferences nationally, and also has developed and shown a presentation called EARTH, teaching about practical changes all people can make to insure future generations a healthy habitable planet. His work on climate change has led him to become a youth plaintiff against the state of Colorado, and a federal plaintiff against the United States, filing law suits for not protecting the atmosphere.

In May, 2012, he went to Washington DC to meet with representatives from all three branches of government, working to garner support for the lawsuits and a Climate Recovery Plan based on NASA scientist James Hansen’s and Bill McKibben’s work. Over 80 members of Congress and the Congressional Progressive Caucus publicly supported the youth delegation.

Xiuhtezcatl was one of the youngest speakers at the Rio+20 United Nations Summit in Rio Brazil in June 2012. He spoke on UN panels and at many of the UN side events. He also had the honor of lighting the sacred fire with indigenous elders from Brazil (view at this link: https://www.youtube.com/watch?v=Cd773X7erys).

Frustrated by the inaction of world leaders, he and two other young people intervened in the UN meetings so that the voices of children would be heard (view at this link: https://www.youtube.com/watch?v=xp-spJD3Bxc).

He is traveling and initiating International Earth Guardian Crews around the globe to fulfill the Earth Guardian mission, and these groups are now going strong in Africa, India, Australia, Brazil and Europe. He is regularly called upon to provide the youth perspective and voice on issues at conferences locally, nationally, and globally, bringing his message of hope, inspiration and the importance of acting now to avoid further damage to ecosystems.
Xiuhtezcatl is also a piano composer and has recorded his first album called “Journey”. His music was used in “Trust Colorado”, a short documentary featuring Xiuhtezcatl and filmed by Peter Gabriel's organization, Witness. It won 2012 Best Environmental Film Documentary of the Year and is being shown in 100 cities world-wide. The documentary can be seen at this link: https://www.youtube.com/watch?v=xr-GUgpic5E

Xiuhtezcatl also writes and performs original message-driven rap music to inspire and educate his peers through performances. His group “Voice of Youth” filmed their first music video called: “Live as if our Future Matters”(view at https://www.youtube.com/watch?v=ANrxvmHUuV0). He will be releasing his new music video "Be the Change” produced and filmed by HBO in December 2013.

Xiuhtezcatl continues to inspire youth and adults alike, encouraging people everywhere to become more aware and educated, and to work together to face the threats to our future from our environmental and climate crises. Xiuhtezcatl is a living example of one of his heroes, Mahatma Gandhi, and he truly reflects the change that he wants to see in the world.

PBS ~ featured on his work on statewide ban on Fracking - https://www.youtube.com/watch?v=lcjGHDUb5Eg

HBO ~ Special on Xiuhtezcatl and Earth Guardians, and a music video - Coming soon